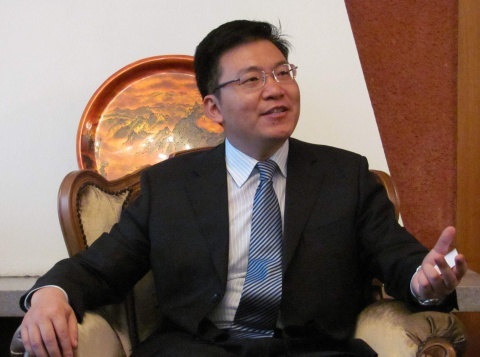 The "Diplomatic Channel" section of Novinite.com (Sofia News Agency) and Novinite.bg is intended to provide ambassadors and senior diplomats with the unique opportunity to express their views through our media outlets, thus reaching hundreds of thousands of diverse, high-profile readers from all around the world.

China follows closely the developments of the situation in Syria, firmly maintains that the current crisis should be resolved through political dialogue in a peaceful and appropriate manner, and has made unremitting efforts to this end.

It is deeply worrying that the situation in Syria remains grave. Violent clashes are continuing, political dialogue still cannot start, and the prospects of a peaceful settlement to the crisis are still dim. China is a responsible country and a friend of the Arab people, including the Syrian people. China adheres to the purposes and principles of the UN Charter and the basic norms governing international relations.

China is committed to upholding the independence, sovereignty, unity and territorial integrity of Syria, peace and stability in the Middle East, and peace and tranquility of the whole world. For realizing a political settlement of the Syrian issue at an early date, China advocates and appeals for the following:

1. The Syrian Government and all parties concerned should immediately, fully and unconditionally cease all acts of violence, particularly violence against innocent civilians. Various factions in Syria should express political aspirations through non-violent means.

2. The Syrian Government and various factions should bear in mind the long-term and fundamental interests of their country and people, immediately launch an inclusive political dialogue with no preconditions attached or outcome predetermined through impartial mediation of the Joint Special Envoy of the UN and the Arab League, agree on a comprehensive and detailed road-map and timetable for reform through consultation and implement them as soon as possible with a view to restoring national stability and public order.

3. China supports the UN's leading role in coordinating humanitarian relief efforts. China maintains that under the precondition of respecting Syria's sovereignty, the UN or an impartial body acceptable to all parties should make an objective and comprehensive assessment of the humanitarian situation in Syria, ensure the delivery and distribution of humanitarian aid. China is ready to provide humanitarian assistance to the Syrian people. We oppose anyone interfering in Syria's internal affairs under the pretext of "humanitarian" issues.

4. Relevant parties of the international community should earnestly respect the independence, sovereignty, unity and territorial integrity of Syria and the right of the Syrian people to independently choose their political system and development path, create conditions and provide necessary and constructive assistance for the various political factions of Syria to launch dialogue, and respect the outcome of dialogue. China does not approve of armed interference or pushing for "regime change" in Syria, and believes that use or threat of sanctions does not help to resolve this issue appropriately.