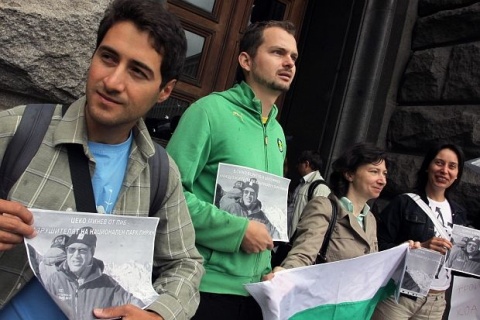 Bulgarian environmentalists and winter sports lovers have staged several protest rallies in Sofia to voice outrage about new legal amendments that would alleviate construction in the nearby Vitosha Mountain. Photo by Sofia Photo Agency

The march was organized by the coalition of NGOs, known as "For Keeping Nature in Bulgaria" with the support of other civic organizations. Rallies are also held in the cities of Plovdiv and Burgas.

In addition to the traditional posters for the protection of forests and against local monopolies, many carried handmade signs reading "I Love the Forest," "Forests Are Not Only Lumber, They Are Our Lungs and Our Heart. Keep Them," "Let's Save the Forests from the Law," "We Want Forests, Not Concrete!"

The demonstrators remind that the second reading of the amendments is forthcoming in the Parliament and if passed they will doom Bulgaria to cheap felling of State and private woods to build ski lifts and tracks, to landslides and floods.

According to them, the forests in protected areas of Bulgaria, which occupy only 5% of the country, will be the most vulnerable. The new Act will be further proof that the State does not serve public interest, but private economic interests of one businessman, who now controls 3 of the 4 major ski areas in Bulgaria - Bansko, Borovets and Vitosha.

The Coalition further points out that the government plans to "cut" 12% from the territory of the National Park "Pirin," which is one the UNESCO world natural heritage list, with the sole goal to allow the expansion of the Bansko ski area.