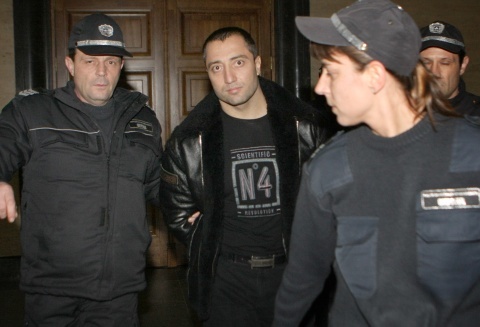 Drug boss Mityo Ochite ("Eyes") (middle) is pictured being escorted to the courtroom. Photo by BGNES

Bulgarian drug boss Dimitar Zhelyazkov, aka Mityo Ochite (i.e. the Eyes) is a free man after he served his sentence and walked out of jail late Friday.

The information was reported by the largest, private TV channel bTV Saturday.

Back then, Zhelyazkov's sentenced was widely advertised by the Three-Way Coalition government as a sign that it was cracking down on mafia bosses even though few, if any, such sentences of high-profile criminals have been seen since then.