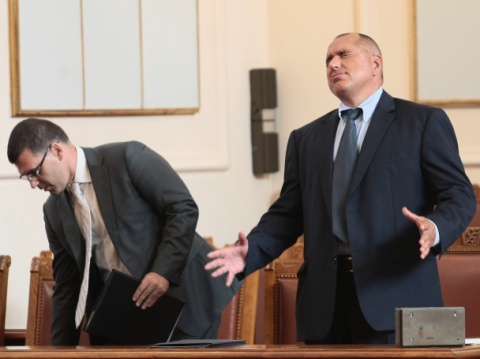 Bulgaria's Deputy Prime Minister and Interior Minister, Tsvetan Tsvetanov, will be proposing changes in the structure of the cabinet, beginning Monday, if it is established that there are senior officials, who failed to return bonuses received in the last two years.

The information was published officially Saturday by the cabinet's press center and comes from the short-hand notes of the Wednesday Council of Ministers meeting.

During the meeting, Prime Minister, Boyko Borisov, had explained that until Friday, the task of calculating and collecting these bonuses is assigned to his other Deputy, Finance Minister, Simeon Djankov, while with the start of the new week Tsvetanov will be the one to plan the said changes.

"In this case, you have until Friday to deal with the "good" Djankov, otherwise on Monday the "bad" Tsvetanov will step forward," the PM had declared.

Bonuses of regional governors and their deputies will be assigned to the Council of Ministers' Secretary, Rosen Zheliyazkov, it had emerged from the notes.

"I think that right here I said that officials such as ministers, their deputies, heads of political cabinets, regional governors and their deputies have a Friday deadline to return or donate all bonuses they have received no matter what they call them and that they should not have gotten any additional money in times of crisis. Those who failed to comply will be replaced – if he or she is a minister, I will submit proposals for their replacement in the Parliament; if he or she is a deputy minister – I will fire them; it he or she is a head of political cabinet, and had not been fired by the respective minister, the latter will be replaced," Borisov has said.

"Since on Friday, I will sign a letter notifying the opposition that there are no people with bonuses in my cabinet, those who still have them will make me look like a liar, which is impossible. I think I am clear and to the point, and you understand me," the PM continues reiterating his earlier appeal to the former cabinet of the Three-Way Coalition to do the same, since they have gotten times more.

The Finance Ministry was supposed to announce by the end of the workday Friday how much money had been transferred to the special account opened by Djankov for the return of the bonuses, however, such announcement was not made.

Instead, at the last moment it was decided to first analyze "the action" for the return of the bonuses at the next meeting of the cabinet and disclose the results after it.