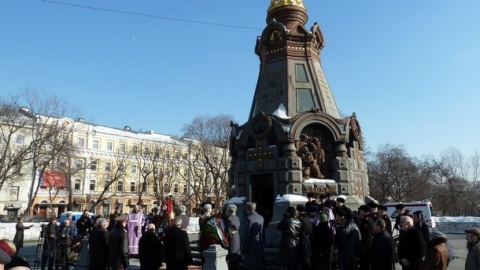 A remembrance service for the fallen in the Russian-Turkish War of 1877-78 was performed on the Slavic Square in Moscow. Photo by BNR

Bulgaria's Day of National Liberation from the Ottoman Empire, March 3, has been celebrated in Moscow by Bulgarians living in Russia and Russian officials.

Bulgaria celebrates on March 3rd its National Holiday, marking the 134th anniversary of its Liberation from five centuries of Ottoman yoke, which came after the Russian-Turkish War of 1877-1878.

In the Russian capital, Bulgaria's Liberation was celebrated on the Slavic Square at the Monument of the Heroes Who Died at Pleven, the city in Northern Bulgaria which in 1877 was the major battlefield in the war between the Russian Empire and Ottoman Turkey.

"This is a remarkable day for the Bulgarian nation because it became free again. We will gather at this holy spot in order to honor memory and pay tribute to the sacrifice of the Bulgarian and Russian warriors who died in the name of freedom," said Russian bishop Sava Voskresenskiy, who performed a remembrance service on the Slavic Square in Moscow, as cited by the Bulgarian National Radio.

On the occasion of March 3, the Moscow History Museum is showing an exhibit entitled "A Balkan Triumph. Pages from the Heroic History of the Russian-Turkish War.

The Russo-Turkish War of 1877-1878, known in Bulgaria as the Liberation War, started in the spring of 1877. Russia was moved to declare war on the Ottoman Turkish Empire after the atrocities against the Bulgarian population during the April Uprising of 1876, which were made known to the world by US journalist working for the British press, Januarius MacGahan.

Some 66 000 Russian, Belorusian, Ukrainian, Finnish, and Romanian soldiers were killed and about 140 000 were wounded on the Russian side of the war. About 30 000 Bulgarians were slaughtered by Ottoman troops and irregulars during the fighting.