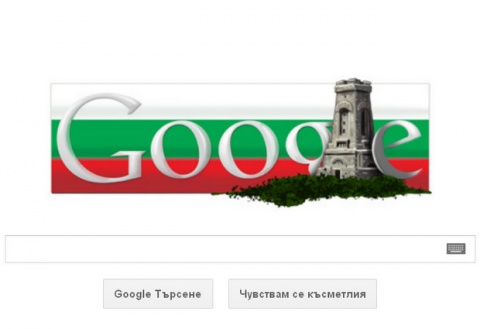 Bulgaria celebrates on March 3rd its National Holiday, marking the 134th anniversary of its Liberation from five centuries of Ottoman Empire yoke.

The Shipka Monument replaced the letter "L", with the Bulgarian national flag as a background (see screenshot above).

Google Doodle has already featured a number of logos dedicated to Bulgarian national holidays. On May 24, 2011, the Day of Slavic Script and Bulgarian Culture, it was written in Cyrillic, "Гугъл".

On March 1, 2011, the Google logo wore a Bulgarian martenitsa to celebrate the traditional Bulgarian holiday of Baba Marta or Martenitsa, and on September 22, 2008, when Bulgaria marked a centennial of its formal independence from the Ottoman Turkish Empire, it featured the Bulgarian flag.