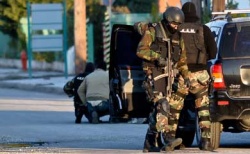 Dozens of police officers took up position around the plastics plant on Thursday and there were reports that they might attempt to storm the premises and disarm the gunman, though he eventually surrendered. Photo by Ekathimerini

A former plastic factory employee shot three people and took two hostages in the northern Greek city of Komotini before surrendering to police early on Friday.

52-year-old Dimitrios Manikas who had been fired from the factory 6 months ago burst into the site Thursday afternoon with a shotgun, firing at the chairman of the company and a Bulgarian employee, who were hospitalized with gunshot wounds not considered to be life threatening.

The Bulgarian has been shot in the thigh, according to the Bulgarian Blitz news agency. A police officer has also been shot and injured in the hand.

Manikas had demanded to be paid EUR 31 000  that he claimed the company still owed him in wages, as well as to be rehired by the company, at which he had worked since July 2000, according to Ekathimerini.

The two hostages, aged 51 and 64, were reported to be in good health.