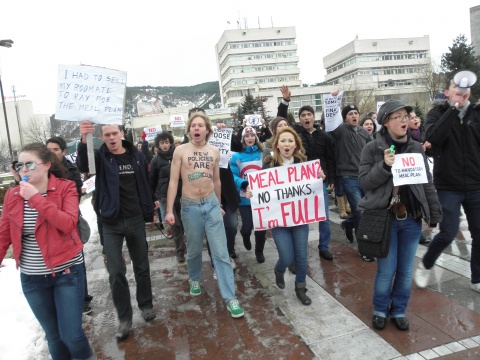 AUBG students have protested against the introduction of a new mandatory meal plan by the school. Photo by BGNES

Over 300 students from the American University in Bulgaria (AUBG) located in the southwestern city of Blagoevgrad have rallied against new school fees, including the introduction of a meal plan.

The AUBG students have protested against the increase of the student activities fee from USD 250 to USD 350, and the introduction of USD 350 meal plan, which also binds them to the AUBG dining services.

The protesters rallied in downtown Blagoevgrad, and upon reaching the AUBG building, they were met by AUBG Provost Cyrus Reed. Later the students were received by AUBG President David Huwiler.

The dispute appears yet to be a matter of talks between the university administration and the student body at the American University in Bulgaria.