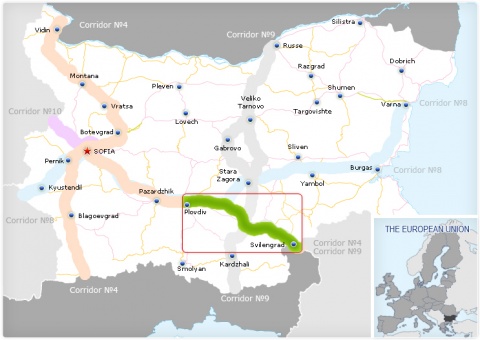 Bulgaria has rebuilt 900 m from the flooded railway line to Turkey and Northeastern Greece. Map from plovdivsvilengradrailway.com/

Bulgaria has managed to restore the railway line in the southeastern part of the country leading to Turkey and Greece, which was badly affected by a major flooding.

The flood near the town of Harmanli, which damaged the railway line, was caused by the breaking of the Ivanovo water reservoir dam on February 6, 2012; the ensuing flooding killed ten locals.

The railway route in question is part of the most direct railway link from Turkey's Istanbul to Central Europe; it also leads from Bulgaria to the Greek Aegean port Alexandroupolis.

The traffic along the Harmanli-Lyubimetz railway line (part of the Sofia-Plovdiv-Svilengrad-Turkish border line) has been resorted, the Bulgarian Transport Ministry announced Wednesday, stressing that in early February the overflowing Biserska river wiped off some 900 m from the railway.

The Ministry said that initial estimates showed it would take a month to rebuild the railroad but Transport Minister Ivaylo Moskovski had accelerated the efforts to fix it.

The only railway section that has not been repaired yet after the floods in Southern Bulgaria is the Galabovo-Radnevo line to the north, where 30 m of railway were destroyed.

The overflowing of the Biserska River has incurred BGN 3 M worth of damages to the railway infrastructure in Southeastern Bulgaria.