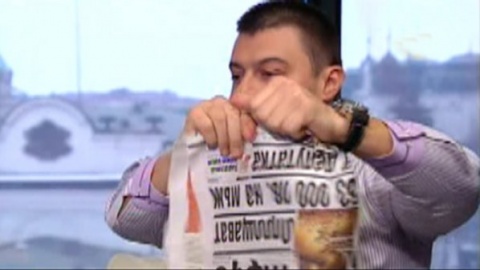 Bulgaria's Council for Electronic Media (SEM) reviewed on Tuesday the case of Nikolay Barekov, a TV host who tore up an edition of Trud daily during Friday's morning broadcast of TV7, calling the newspaper "a rug" and saying that it would cease to exist.

Barekov staged the provocation to demonstrate his attitude towards Bulgaria's policy in the pharmaceutical sector, which came under fire after publications claiming that Sopharma, a major Bulgarian drug maker, was selling its products way cheaper in Turkey, Serbia and Poland.

Ognyan Donev, majority owner of Sopharma, is a co-owner of Trud daily.

On Tuesday, SEM announced that Barekov's newspaper-bashing did not constitute a violation of the the Radio and Television Act.

Representatives of the watchdog said TV7 would receive a letter expressing SEM's stance on the matter.

SEM explained that the issue was within the competence of the Ethics Committee for Electronic Media.

"This case triggered a spike in public interest but it cannot summon enough social energy to sustain this reaction, this level of interest, for a long time. This is an unacceptable gesture for Bulgarian society," SEM Chair Georgi Lozanov commented.

According to Alexander Kashamov from the Ethics Committee for Electronic Media, the Code of Ethics of Bulgarian Media has a provision related to the matter, which says that media outlets ought to treat each other with respect and must not engage in unfair competition.

"To tell you the truth, I am finding it difficult to evaluate the occurrence because, as it regularly happens in Bulgaria, it is quite unique. To me, what happened is a symptom of a crisis, rather than a real ethical problem. The real problem on the agenda of media outlets is the coverage they provide for important matters, rather than tampering with personal or collective rights beyond proportion," Kashamov stated.

According to Orlin Spasov, a senor lecturer in journalism "the Hitler analogy was exaggerated, it was yet another form of over-reaction".

"Barekov tried to introduce the mode of excess into the profession, to ultimately blur the boundaries between information and entertainment," Spasov stated.