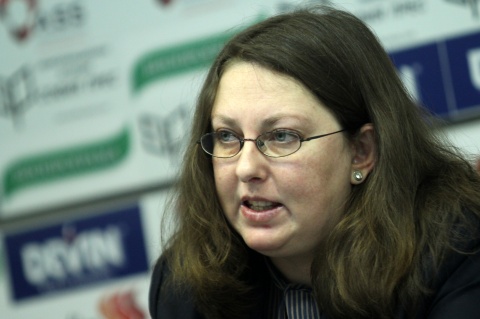 Violeta Nikolova, the former Executive Director of the Registry Agency, gave a press conference Tuesday to account for the scandalous bonus payments at the institution. Photo by BGNES

Violeta Nikolova, the former Executive Director of the Registry Agency, gave a press conference Tuesday to alleviate social tensions surrounding the disclosure of hefty bonus payments awarded at the institution despite its poor track record in servicing the Trade Register.

In her Tuesday statement, Nikolova said that she had learned only recently that receiving bonuses was socially reprehensible.

Stressing that her work was "worthy of respect", she added that her achievements were the result of long hours of overtime, rather than 8-hour workdays.

Nikolova was dismissed last week over the poor results of the audit of the institution and the substantial financial incentives she had awarded to herself.

It was revealed that she had received a total of BGN 73 000 in bonus payments for 2011, BGN 25 000 of which had arrived after an order by Margaritra Popova, then-Justice Minister, while the remaining BGN 48 000 had been ordered by Nikolova in person.

On Tuesday, Nikolova confirmed the amount of her bonus payments for 2011, noting that the Justice Minister had stopped signing orders for additional financial incentives at the Registry Agency in July 2011 for some unknown reason.

She went on to explain that an ordinance regulating the rules of procedure at the Registry Agency allowed the Executive Director to award bonuses at their discretion whenever there were extra money.

Niklolova insisted that she had received the sum of BGN 48 000 for the period July-December 2011 in line with the said provision.

"Speaking about bonuses, we must take into consideration the work that gets done," she declared, adding that the job of front desk assistants was different from that of an executive director.

"When I signed orders for awarding additional financial incentives my main consideration was the fact that the Registry Agency channeled BGN 70 M into the state budget during my term in office. What is more, it is in the top three of revenue administrations together with the National Revenue Agency (NRA) and the Customs Agency," Nikolova stated.

Prior to last week's disclosures, the former Executive Director of the Registry Agency had steadfastly refused to announce the amount of bonuses she had received, citing phone threats.

During Tuesday's press conference, she firmly rejected allegations that she had BGN 100 000 in her bank account and that she had taken advantage of donations.

Shortly after Nikolova's dismissal, it was reported that Bulgaria was facing a fine of EUR 800 000 by the European Commission over a delay in the introduction of new software at the Registry Agency.

"The new software would have allowed the online registration of European companies in the Registry Agency's data base," Deputy Justice Minister Denitsa Valkova explained in an interview on Monday.

"At present, European companies can not register online in Bulgaria's Trade Register. The public procurement tender for the software was launched in March 2010 only to get suspended three months later due to a funding shortage," she added.