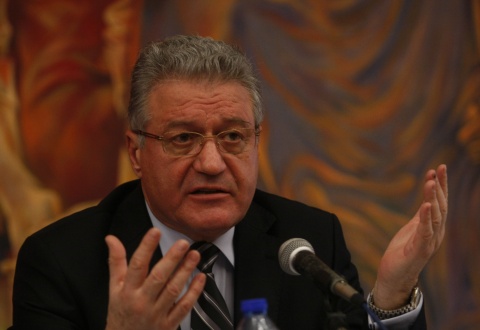 Vice President Angel Marin has ended up mired in a scandal concerning the legality of and the motives behind the pardons granted by him. Photo by BGNES

Former Vice President Angel Marin signed decrees for granting partial or full pardons to 49 convicts despite the motivated refusals on the part of the Pardons Committee.

Citing data obtained from the President's Office after a query under the Access to Public Information Act, Bulgarian news portal Mediapool reported Monday that over half of the pardons granted despite the negative reports of the Committee concerned murder convicts and six had been granted to inmates guilty of exceptionally brutal murder.

At the end of last week, the former Vice President said at a press conference that none of the 533 offenders pardoned during his two terms in office (2002 – 2012) "has a nickname or is involved in a scandal".

The recommendations of the experts at the Pardons Committee are not binding for the Vice President who has no obligation to motivate the pardon decrees.

Pardon papers are sent for execution to the Justice Minister, who has no authority to alter the will of the President.

Angel Marin granted a pardon for the probation period and the remainder of the jail term of Euroroma Chair Tsvetelin Kanchev despite the unanimous disapproval of the eight-member Pardon Committee.

The former Vice President also granted a pardon for a convict about whom the Committee said that "he should not be granted a pardon because he has prior convictions for failure to pay alimony, for fraud, theft and embezzlement; he has already spent 7 years and 4 months in a number of prisons; after he serves the jail term he has been handed down, for which he is currently seeking a pardon, he will have another 11 years to spend in prison. The majority of the crimes he has committed, almost all of them crimes against property, indicate a threat of repeat offences; the convict has entrenched lasting criminal habits and there are no special circumstances necessitating pardon."

Marin granted a pardon for 6 years of imprisonment for attempted bribery to the head of the Municipal Property Directorate at the Varna Municipality, disregarding recommendations of the Committee that the case involves a grave crime which is extremely socially reprehensible and "erodes the foundations and the authority of the state administration".

The members of the Pardons Committee warn that the "pardon would discredit the intolerance towards top-level corruption widely championed by President Parvanov".

The pardons granted by Angel Marin stirred a scandal after it turned out that then-President Georgi Parvanov had failed to issue a decree delegating the authorities related to pardon and citizenship applications to the Vice President for the second term in office.