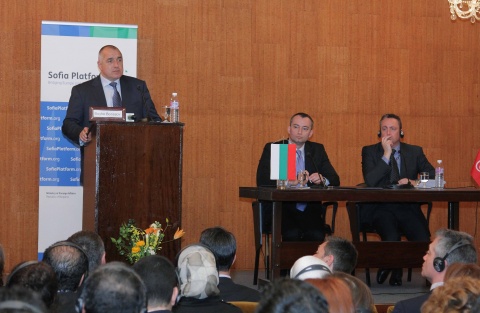 Bulgarian PM Boyko Borisov speaks at the Sofia Platform, a forum in the Bulgarian capital holding regular meetings with oposition leaders from accross the Arab World to promote democratic change. Photo by BGNES

Bulgaria will offer technical assistance to Tunisia in its efforts to write a new constitution, Bulgaria's Prime Minister Boyko Borisov announced during his visit to the North African country.

On Monday, Borisov claimed that he has become the first EU Prime Minister to visit Tunisia since the Arab Spring broke out, adding that he hoped Bulgaria and Tunisia to develop successful bilateral projects.

The Bulgarian PM visited Tunisia for the official opening of the Tunisian School of Politics.

The School is modelled on the Bulgarian School of Politics that has been training young Bulgarian political leaders since 2001.

Borisov met with his Tunisian counterpart Hamadi Jebali and later revealed that he has invited him and the Tunisian President to Bulgaria. The Bulgarian PM revealed that his country's exports to Tunisia have increased

"In our conversation the Prime Minister acquainted us with the development and the problems in Bulgaria's transition towards democracy. We hope that we will develop good relations courtesy of this visit," Jebali said after the meeting.

"The Prime Minister asked me to request more help and attention for Tunisia at the European Council meeting. Democratic processes have to be supported. We reiterated our clear disapproval of what is happening in Syria and demanded that violence is stopped as soon as possible," Borisov declared, as cited by dnevnik.bg.