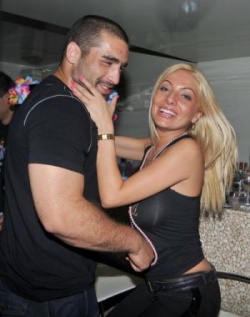 Bulgarian MMA fighter Blagoi Ivanov, who was stabbed early Sunday morning in a pub brawl in Sofia, is still fighting for his life, announced doctors.

Ivanov has sustained a deep knife wound in his chest that reached to his heard and is currently under artificial respiration at the intensive care unit of Pirogov Hospital in Sofia.

Surgeons have carried out a life-saving operation on their patient, but say his life is still under a real threat.

Sunday night Ivanov and two of his friends had just occupied their places in a bar on Graf Ignatiev Str., when a group of 8 persons armed with bats and knives came in and attacked them.

Police are still investigating the bloody incident and have examined CCTV records of the pub in which it took place.

Some weeks ago, a person was shot in the leg in front of the very same bar on Graf Ignatiev Str. in downtown Sofia.

Blagoi Ivanov, aka Bagata, is known in Bulgaria for organizing and participating in so-called "free fights," in which the audience bet on the outcome. He has also made fame dating notorious "playmates."