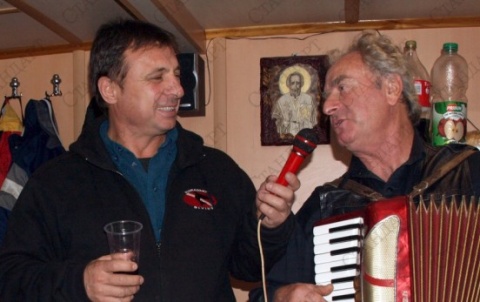 Murdered Yordan Harasimov, (l), was the major trader of fish products on the Northern Bulgarian Black Sea coast, and one of the largest in Bulgaria. Photo by Standard

Businessman Yordan Harasimov, was blown up in his car in Bulgaria's Varna on Friday, less than 24 hours after a meeting with representatives of the Executive Agency for Fishery and Aquacultures (IARA).

The news was reported Saturday by the Bulgarian "Standard" daily, citing their own sources, who had spoken off the record.

The explosion that killed Harasimov occurred at a major downtown Varna crossroads near the Varna University of Economics shortly after 8 am on Friday.

The meeting in question had been called so that IARA could explain to the fish business the new rules for catching turbot. Bulgaria was able to keep its quota for the rare fish, but the companies insist the quantities are insufficient and the business fights for a larger share, "Standard" writes, adding that according to the sources, this could be one of the reasons for the murder.

Other leads revolve around the trade of veined rapa whelk, which, according to fishermen, is largely part of the shady economy. The export is destined mainly for Japan, the US and Turkey – the latter being one of the strongest competitors of Bulgaria in catching turbot because unlike Bulgaria and Romania, Turkey has no limiting quota. Experts in the sector stress it reduces the turbot population and hurdles the catching.

According to "Standard," one of Harasimov's companies had applied for EU funding for cutting a trawler for scrap, but this project could not be considered a likely motive for murder.

Meanwhile, however, another large-circulating Bulgarian daily "Trud," writes that the main lead for the explosion is precisely EU funding in the amount of BGN 4 M for the construction of the fishery port in the city of Varna, which had hurt seriously some business interests.

A week ago, the businessman told some people close to him that he had "problems with persons from the capital Sofia, who were trying to block the port project."

"Trud," citing anonymous police sources, writes that it is very likely that these Sofia people had racketeered, blackmailed and threatened Harasimov, and have finally decided to kill him.

On Friday, Interior Minister Tsvetan Tsvetanov announced that the Varna businessman had old "violations" and paid serious money for a long time to escape the law, and that he had a long-time conflict with a former business partner.

A check of "Trud" has revealed that between 1995 and 1999, Harasimov had as a partner a businessman from Turkey, who currently has two companies, registered in the Bulgarian Black Sea city of Burgas, in partnership with several other Turkish citizens.

In the last years, Sever Export had a very large business with Turkey, but the involvement of the former Turkish partner, if any, remains unclear.