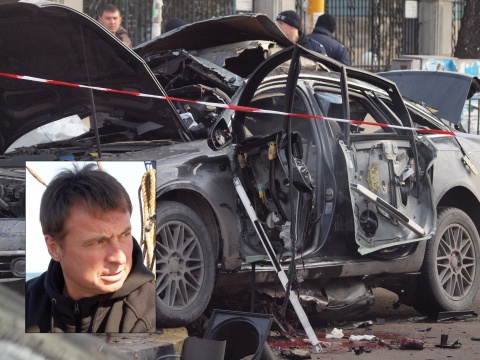 Picture of Varna businessman Yordan Harasimov, who was killed when a bomb planted in his car (pictured) exploded overnight. BGNES

Businessman Yordan Harasimov, who was blown up in his car in Bulgaria's Varna on Friday, had old "violations" and paid serious money for a long time to escape the law, Bulgarian Interior Minister Tsvetan Tsvetanov announced.

The explosion that killed Harasimov occurred at a major downtown Varna crossroads near the Varna University of Economics shortly after 8 am on Friday.

"The investigation is in an initial stage and I hope we will have more details later," Tsvetanov told the media during the day.

The Varna car blast seems like a reminiscence of Bulgaria's mobster wars in the 1990s when former professional wrestlers dominated the powerful Bulgarian underground, but in his statement, the Minister asked everyone to look back in time and compare the number of contract murders and kidnappings in the last 20 years with the number of those that occurred in the last 2.5 years since his Citizens for European Development of Bulgaria party, GERB, took office.

He explained that the essence of organized crime does not allow the immediate detention of the perps, as soon as they are found to be part of the act, because "a huge amount of work had to be done prior to that."

"There is a need of lots of operative procedures to reach the stage when we can have indictments based on the investigation of the police and the prosecution and take the matter to the Court," said he.

He pointed that currently 5 cases related to contract murders, kidnappings and racket are tried in Court, and voiced firm belief in "the upcoming good results."

Shortly before Tsvetanov's comments Interior Ministry officials refused to reveal any details about the investigation saying only that they had several scenarios about who might be behind Harasimov's murder.