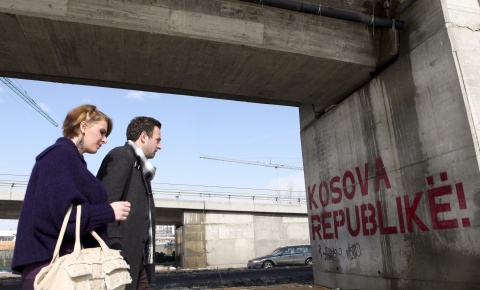 Representatives of Serbia and breakaway Kosovo have signed an important treaty to pursue regional cooperation at the end of talks in Brussels Friday.

The two parties have reached an agreement on Kosovo's participation in regional forums, as well as for joint management of border checkpoints, reports the Serbian Radio and TV.

Those were the two main issues of contention between Belgrade and Pristina, which had talks suspended for months.

Negotiations between Serbia and Kosovo resumed Wednesday, after high pressure on the part of the European Union.

Serbia is expecting to finally get an EU official candidate status at the upcoming European Council March 1-2.

As part of the treaty unveiled Friday, Serbia has agreed to let Kosovo participate in regional forums, without retracting its own delegates.

Until now, Serbia refused to participate in events in which representatives of Kosovo are present, for it does not recognize the independence of its erstwhile province.

In a prior interview for Pristina newspaper Express, Kosovo PM Hashim Thaci had commented that reaching such an agreement would mean a de facto recognition of Kosovo's independence by Serbia.

Friday Serbia and Kosovo are also reported to have reached an agreement to jointly oversee their border to secure a safe and free transit of people and goods.

The two had entered in a mutual trade embargo, which led ethnic Serbs in Northern Kosovo, who do not recognize Pristina authorities, to impose a blockade on the border.

The Friday agreement was met with acclaim by European Union representatives.

"We welcome the cooperation agreement reached today. It is important not only for Serbia and Kosovo, but also for security in the region and the entire EU," said EU High Representative for Foreign Policy Catherine Ashton.