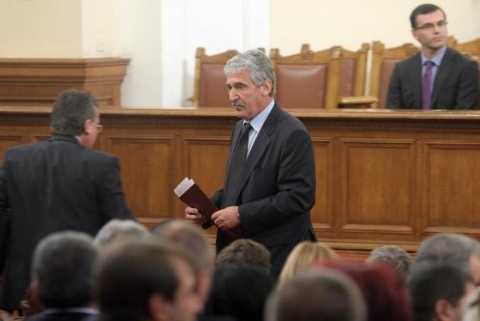 The Chairman of the parliamentary group of GERB, Krasimir Velchev, informs the National Audit Office will probe bonuses distributed during the previous cabinet term. Photo by BGNES

Bulgaria's ruling GERB have asked the National Audit Office, NAO, to submit a report for bonuses obtained by Deputy Ministers during the term of the previous Three-Way Coalition cabinet.

The news was reported Friday by the Chairman of the parliamentary group of Citizens for European Development of Bulgaria, GERB, in the heels of a publication in "Trud" (Labor) daily that politicians - current Members of the Parliament from the left-wing Bulgarian Socialist Party, BSP, and Deputy Ministers in the Socialist-led previous cabinet such as Kornelia Ninova and Dimcho Mihalevski had received staggering bonuses in the amount of BGN 150 000 and BGN 100 000, respectively.

Both have already denied the information. Mihalevski says he had gotten BGN 22 000 not in bonuses, but for participating in some management bodies, while Ninova declared she will present proof for her income to the media.

In addition to announcing the requested NAO audit, Velchev rhetorically asked if these people, once proven they had gotten the money, would donate it to charities as did the now-ex Director of the National Health Insurance Fund, Neli Nesheva, who resigned one week ago under pressure from a scandal with her large bonus.

The GERB MP further explained how his party's cabinet passed a law in 2010, banning additional cash rewards for Board members, Deputy Ministers and members of political cabinets, stating GERB is ruling with "enough transparency."

"We want full clarification of all facts for everyone when it comes to bonuses received," Velchev concluded.