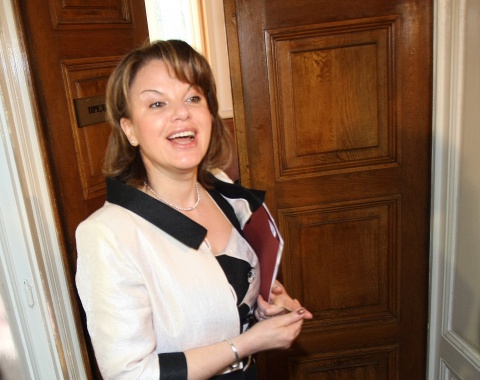 Neli Nesheva has been discredited as Bulgaria's Health Fund chief. Photo by BGNES

On Tuesday, she fulfilled her promise to donate her bonuses signing a contract with a representative of "Children and Youth" Association in the presence of two attorneys.

The decision of the GERB party MPs made Tuesday to okay Nesheva's resignation was unanimous; it emphasized her own desire to quit after the bonus scandal and the public tensions it caused.

At the same time, the GERB party has given a high assessment to Nesheva's work as head of the National Health Insurance Fund by saying that she facilitated the institution's "stabilization."

Because of that, they recommend that Bulgarian PM Borisov give her a chance to "develop in the government of the country and especially in the healthcare sector."

"Neli Nesheva has been working well but a single action can damage everything," Bulgarian PM Borisov commented on the demands for her resignation, as cited by BGNES.

"A spoonful of tar in the honey jar is enough to spoil the honey's taste," the PM stated apparently considering Nesheva's bonus scandal to be the only issue in Bulgaria's healthcare sector.

Meanwhile, the National Association of Private Hospitals and the National Alliance of People with Rare Diseases joined Tuesday a number of others voicing support for Nesheva.

In the last few days, the Bulgarian Doctors Union, the Bulgarian Industrial Chamber, the Union of Multi-profile Hospitals, and the Parliamentary Committee on Health have declared their backing for her, and insisted that changes in NZOK leadership will unnecessarily shake the system.