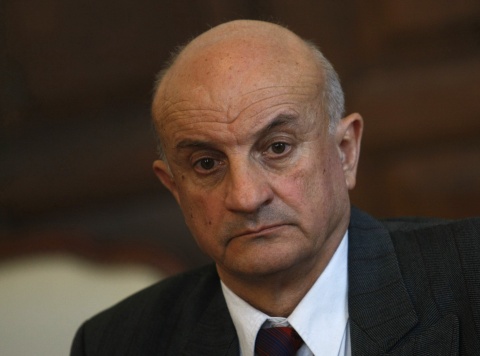 Radoslav Cheglayski is the new Chairman of the Board of Directors of Irrigation Systems. Photo by BGNES

Radoslav Cheglayski has been elected as the new Chairman of the Board of Directors of Bulgaria's state-owned company Irrigation Systems.

He was elected Tuesday by a unanimous vote at an open session of the three-member Board of Directors at the Ministry of Agriculture and Food attended by Agriculture Minister Miroslav Naydenov.

Lyudmil Denev, Chief Engineer of the company, was appointed member of the Board of Directors.

Georgi Harizanov was removed from the post of Chairman of the Board of Directors of Irrigation Systems late on Monday after reports by Trud daily that he was standing trial for issuing a death threat in 2008 and was also being investigated for embezzling USD 50 000 from a Sofia-based company back in 2001.

Speaking at a Monday press conference on the matter, Naydenov explained that Harizanov had been suspended from his duties because he had kept silent about the charges, not because he was presumed guilty.

The Agriculture Minister noted that Harizanov would be reinstated to his position if he was cleared of the indictment charges.

"They have actually targeted me, but this will not stop me," Naydenov remarked, suggesting that the renewed legal action against the former Chair of the Board of Directors was part of a campaign to discredit him.

The Agriculture Minister reiterated his high estimate for the work of Harizanov, who had helped Irrigation Systems get back on its feet, had brought back the salaries to 2000 employees of the company and had taken care of the crisis management in the aftermath of the floods in early February.

Commenting on Harizanov's background, he said that the university degree was not mandatory for the members of a company's Board of Directors.

On Friday, it emerged that Georgi Harizanov had not completed his university studies, which prompted Naydenov to compare him to Microsoft co-founder Bill Gates.

The Irrigation Systems company gained media prominence due to the debates surrounding the ownership of dams in Bulgaria.

The issue surfaced after a dam wall collapsed on February 06, causing a deadly flood in the southern Bulgarian village of Biser.