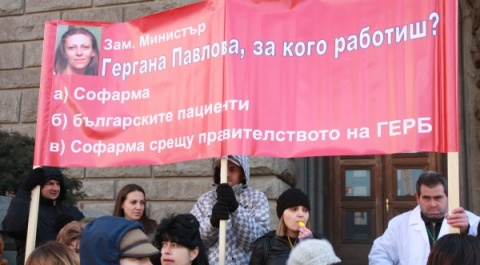 Bulgarian pharmacists are seen protesting against Deputy Health Minister, Gergana Pavlova, who was just fired, over her alleged ties with the Sopharma company. Photo by Impact Press Group

The news was reported by the Council of Ministries press office, saying that the PM's decision was based on his own grounds.

Pavlova was in charge of the medications policy of the institution.

Gergana Pavlova, 38, has a degree in economy and had been working at the Health Ministry since 2010. She was appointed at the time when Anna-Maria Borisova was Health Minister. Before that she had worked for the pharmaceutical companies Sanita Trading and Sopharma Trading and for the international consultancy company "IMS Health."

The Bulgarian daily Monitor writes that the Deputy Health Minister had been in the bottom of the problem with high medication prices in the country, citing an investigative report of TV7 for the monopoly of Sopharma in supplying medications to hospitals.

Hospitals have been forced to conduct their own tenders for medications over amendments in Decree 34, which were imposed after Pavlova's appointment, Monitor writes.

Pavlova's dismissal comes on the heels of the resignation of the discredited National Health Insurance Fund, NZOK, Director, Neli Nesheva, whose fate is being decided on Tuesday by the parliamentary group of ruling Citizens for European Development of Bulgaria party, GERB.