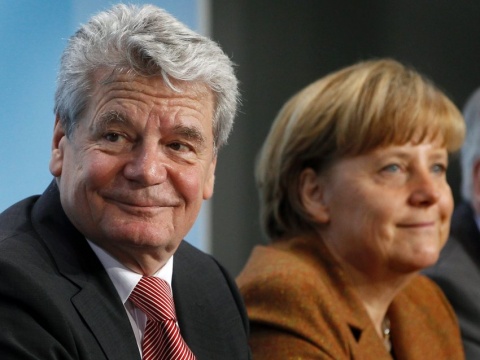 German Chancellor Angela Merkel is pictured here with Joachim Gauck at a news conference in the Chancellery after a meeting with representatives from her centre-right government and the opposition. Photo by Spiegel

German Chancellor Angela Merkel has backed Joachim Gauck, a pastor and former East German rights activist, to be the country's next president, under opposition and public pressure.

Merkel opposed Gauck for the presidency in 2010, instead supporting her ally Wulff.

Merkel confirmed her backing for Gauck at a news conference in the Chancellery after a meeting with representatives from her centre-right government and the opposition.

"Let's not forget that we have churchmen like Gauck to thank for the success of East Germany's peaceful revolution," she said, as cited by BBC.

Merkel is herself the daughter of a Protestant pastor and, like Gauck, grew up in the former East Germany.

The 72-year-old Gauck is well known for his work as a dissident in East Germany and for running the archives on the Stasi secret police after the Berlin Wall came down, exposing its crimes.

"This man can provide an important impetus for the challenges of our time and the future," she said.

Having gained the support of all the major parties, Gauck's election to the position next month should be just a formality.

Gauck was proposed by the opposition Social Democrats and Greens after Christian Wulff quit as president on Friday over corruption allegations.

The presidential post in Germany is largely ceremonial, but prestigious and influential.