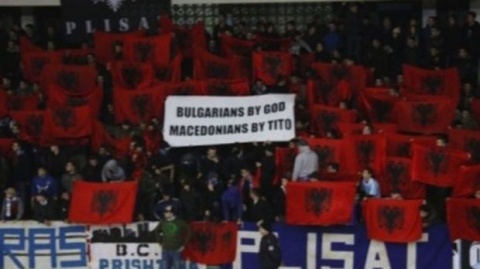 "Bulgarians by God, Macedonians by Tito", reads in English the banner of the Kosovo sports fans in Prishtina. Photo by BGNES

"Bulgarians by God, Macedonians by Tito," read the banners in English of the Kosovo fans during a handball game between the youth teams of Kosovo and Macedonia in Prishtina Friday, apparently referring to former communist Yugoslavia dictator Josip Broz Tito.

They also burned the Macedonian flag. The handball match was organized on the occasion of the fourth year since Kosovo's declaration of independence.

Local commentators said the Kosovo fans had thus moved to respond to provocations that Macedonian fans staged against ethnic Albanians during a recent European handball cup held in Belgrade.

Before the communist takeover of the former Yugoslavia in 1944, Macedonians were considered part of the Bulgarian nation since the early Middle Ages.