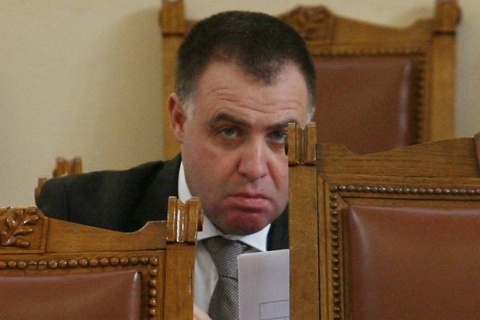 Agriculture Minister Miroslav Naydenov has rushed to the defense of the discredited chair of board of Irrigation Systems. Photo by Sofia Photo Agency

The Chairman of the Board of Directors of the state-owned Irrigation Systems company, Georgi Harizanov, has not completed a bachelor's degree and is currently a student.

The information about Harizanov' qualification was requested Friday in Parliament by Petar Kurumbashev from the Bulgarian Socialist Party (BSP), who also wished to learn about the careers of the chairs of board of the 11 regional units of Irrigation Systems.

The Irrigation Systems company gained media prominence due to the debates surrounding the ownership of dams in Bulgaria.

The issue surfaced after a dam wall collapsed on February 06, causing a deadly flood in the southern Bulgarian village of Biser.

"Are Kalinki  (Kalinka means ladybird in Bulgarian, editor's note) flying over Irrigation Systems too, Mr. Naydenov?", the left-wing MP asked, reminding the case of Kalina Ilieva, former CEO of the State Agriculture Fund, who was dismissed after it turned out that her university diploma was fake.

Responding to Kurumbashev's provocation, Naydenov defended Harizanov's appointment by saying that" one of the greatest minds of our time and the richest man in the world, Bill Gates, similarly holds no university diploma."

The Agriculture Minister insisted that Irrigation Systems had managed to turn a profit for the first time after the appointment of the new Board of Directors in November 2011.

Before that, Naydenov noted, the state-owned company had been piling up debts to the state budget and had also often delayed the payment of salaries.
"The boards of directors are responsible for the financial condition of a company and its units," he stressed.

"Irrigation Systems' Chief Executive Officer is an engineer, while its Chief Operating Officer holds a degree in hydraulic engineering," Naydenov stated, concluding that the people should be judged by their actions, not their education.

He went on to praise Harizanov for his on-site work following the February 06 flood in the village of Biser.

"May Harizanov have Bill gates' fate", Kurumbashev commented, adding that 10 of the total of 11 chairs of board of the regional units of Irrigation Systems lacked a degree in hydro-engineering.