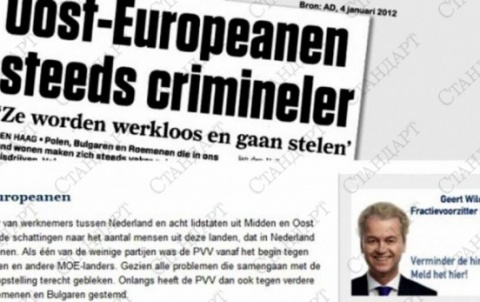 Bulgaria's MEPs have unanimously expressed their outrage with the Dutch website for complaints against Eastern Europeans that has recently stirred heated discussions.

In a statement on behalf of all Bulgarian Members of the European Parliament, the Dutch far-right Freedom Party (PVV) has been accused of trying to discriminate European citizens through the website in question.

"We do not accept the application of double standards and the discrimination of Bulgarian citizens and we will do all we can as Members of the European Parliament to ensure the observing of fundamental EU rights and values," the statement goes.

On Monday, the ambassadors of 10 Central and Eastern European countries, Bulgaria included, sent an open letter to political party leaders in the Netherlands protesting against the xenophobic website.

The Bulgarian MEPs from all political groups within the European Parliament have also united in their opposition to the controversial ACTA trade agreement, declaring that they will oppose its ratification in its current form.

On Wednesday, Bulgaria's cabinet decided to halt the ratification of ACTA in the country. The country's Prime Minister Boyko Borisov vowed that the Members of the European Parliament from his ruling, center-right Citizens for European Development of Bulgaria party, GERB, would not endorse the ratification of ACTA. Prior to that, the left-wing oppositional Bulgarian Socialist Party also declared it would not support the agreement in the European Parliament.