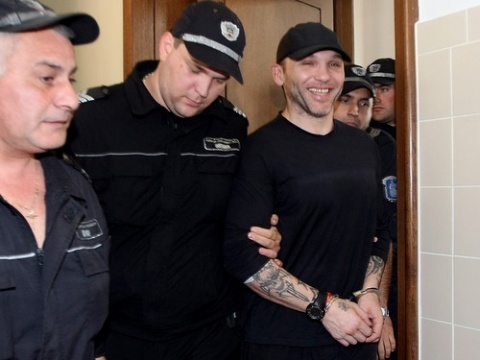 Zlatomir Ivanov AKA Baretata (r), is believed to be one of the top, still living, Bulgarian underworld figures. Photo by Sofia Photo Agency

On February 7, the prosecution asked for a jail sentence of 17 years in what is considered one of the most emblematic and high-profile organized crime cases in Bulgaria.

Ivanov and 20 other people were charged with participating in an organized crime group, illegal drugs trade, and with plotting the murder of Rumen Stefanov AKA Alf. The magistrates ruled him not guilty on the latter charge.

The rule can be appealed with the Sofia Court of Appeals.

In February 2009, Ivanov turned himself in, after authorities issued a nation-wide search warrant for him.

The trial against Baretata began in May 2010 only to start from scratch at the end of the year, after one of the jurors was charged with child pornography in November. Petar Georgiev was detained October 22 during a special police operation codenamed "Pedophiles."

All 107 witnesses and 52 exerts were questioned all over again.

Zlatomir Ivanov, a heavily tattooed man in his late 30s, is charged with being the ringleader of an organized crime group dealing with illegal drug trafficking and with first-degree murder for the killing of Stefan Ivanov aka Alf, committed in a way that endangered the life of many people. The shooting happened in 2007 in a disco bar in the western city of Pernik.

Baretata is believed to be one of the top, still living, Bulgarian underworld figures.

In October, 2011 the Sofia Court of Appeals released him under house arrest after he complained about stress and a urinary infection following surgery.