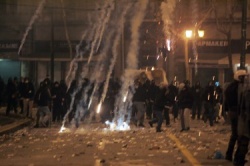 Photo of the Sunday night riots in Athens, EPA/BGNES

The Greek Parliament passed by a large majority in the small hours Monday a much-expected austerity package required for the second bailout for the country.

Ahead of the vote, Greek PM Lucas Papademos said that a "wrong decision" on the bill could lead to a "catastrophe".

Two of the cabinet coalition parties, PASOK and New Democracy, voted for, but conservative third ally, the LAOS party, voted against, boding problems for the Papademos cabinet.

The debate at Parliament was accompanied by huge anti-austerity protests in Athens and Thessaloniki Sunday evening.

Violence was especially rampant in Athens, where 70 persons are reported injured overnight.

A number of building, including banks, shops, and official offices, have had their windows smashed and been set aflame.

Harsh austerity measures include a 22% reduction of the minimum wage, 7-15% reduction in retirement pensions, firing of 20% of civil servants, a liberalization of the market and cutting down of state spending.