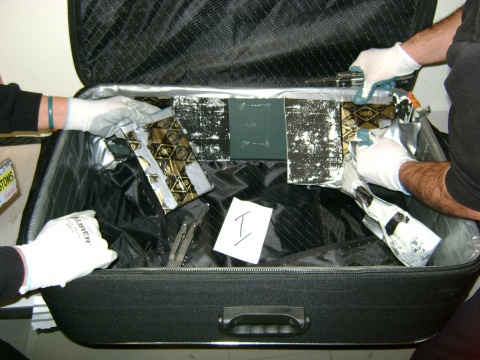 4.5 kg of cocaine were found in a woman's suitcases at Sofia Airport. Photo by Customs Agency

Bulgaria's Customs Agency has detained a total of 4.6 kg of cocaine in two separate drug shipments at Sofia International Airport, the institution announced.

The first shipment of 4.5 kg of cocaine was found in two suitcases carried by a Bulgarian woman arriving from Sao Paulo, Brazil.

She was detained for 72 hours; the cocaine shipment is estimated at 45 000 doses worth a total of EUR 2 M in retail prices.

In a separate case, the customs agents at Sofia Airport captured a 100 gram shipment of cocaine in a parcel sent from Costa Rica. Upon receipt of the shipment, the police detained three Bulgarian citizens from the Southern city of Plovdiv which were the recipients.

Bulgaria is known to have become a major European entry point for Latin American cocaine.