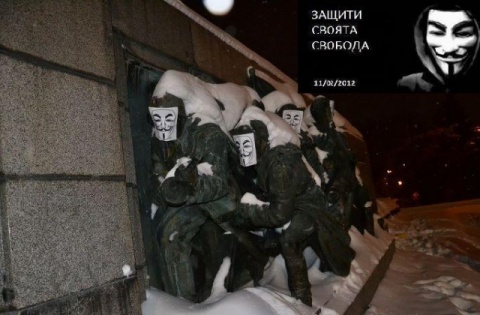 The soldiers on the Soviet Army monument if Bulgaria's capital Sofia have been painted overnight wearing the mask of Guy Fawkes, symbol of the global protest against ACTA. Photo by blitz.bg

The soldiers of the monument of the Soviet Army in downtown Bulgaria capital Sofia "woke up" Saturday morning to new roles – as activists of the anti-ACTA movement.

The Red Army soldiers have been painted overnight wearing the mask of Guy Fawkes, symbol of the global protest against ACTA.

Bulgarian anti-ACTA activists have written in Facebook Saturday morning that "ACTA will impose censorship on both heroes from the present and the future."

"When the past stands against the present, it means – we must save the future. Let's raise all together against ACTA," the Facebook slogan reads.

International protests against the Anti-Counterfeiting Trade Agreement, ACTA, are expected in at least 150 cities across Europe Saturday.

In Bulgaria protests, organized through the social network Facebook, will take place in 15 cities, starting at 11 am.

Marches will be held in Bulgaria's largest cities of Varna, Plovdiv, Burgas, Gabrovo, Ruse, Haskovo, and Yambol, among others.

In the capital Sofia, the rally begins in front of the National Palace of Culture and will end on the square in front of the building of the Parliament, where a meeting will be held. The march has imposed a number of traffic and parking restrictions along its route, the Sofia City Hall informs; they will be effective at least until 2 pm.

In June 2011, a group of street artists painted the bronze figures of Soviet soldiers to represent various US pop culture characters, turning them into The Joker, Wolverine, Santa, Superman, Ronald McDonald, Captain America, Robin, and Wonder Woman, among others on June 18, it has been revealed.