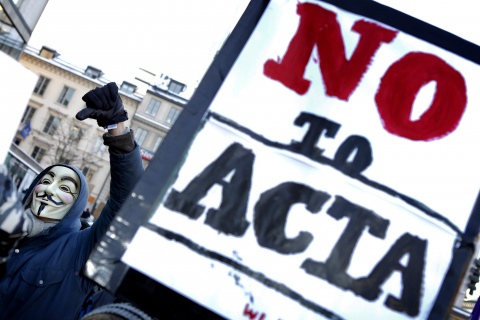 A protestor wearing a Guy Fawkes take part in a demonstration to protest against the Swedish government`s plan to ratify the Anti-Counterfeiting Trade Agreement (ACTA), in Stockholm, Sweden, 04 February 2012. EPA/BGNES

Germany will not sign an international anti-piracy treaty, despite having already agreed to it in principal, government sources in Berlin said Friday, as cited by the German press agency DPA.

The so called Anti-Counterfeiting Trade Agreement (ACTA), initiated by the United States and Japan, seeks to protect intellectual property rights, "including infringement taking place in the digital environment".

As it is expected to crack down on torrent tracker sites, it has been met with a wave of opposition in Bulgaria which led the Bulgarian government to declare that it would apply ACTA "with reservations". In Poland, the government of Donald Tusk said recently it froze the ratification of ACTA over the massive protests, including street rallies.

ACTA was signed by the European Union and 22 of its 27 member states in January. Germany said at the time it would soon follow suit.

But since January, the treaty has been the subject of protest, mainly online, by people who say it will require signatory countries to punish even non-commercial breaches of copyright with criminal prosecution and jail terms, DPA reminds.

Tens of thousands of people аre expected to take part in protests in 60 German cities on Saturday, while the international coordinator of the campaign group Stopp ACTA told DPA that it expected 150,000 to 200,000 protests to take place worldwide.

Despite the EU's signature, it still needs ratification by the European Parliament and the individual states before it can come into effect.

ACTA foresees that internet providers divulge details such as a user's IP address so that people can be identified in cases of copyright infringement.

After rejecting protesters' concerns last week, German Justice Minister Sabine Leutheusser-Schnarrenberger said Friday that she was pleased that a debate about ACTA was being "led so openly and enthusiastically. It's necessary that all the facts are on the table," she added.