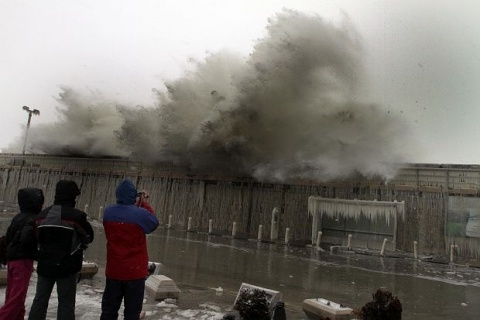 The wall of an ancient building, most likely from Roman times, emerged in Sarafovo, near the Balck Sea city of Burgas Wednesday.

The discovery happened in the vicinity of the vacation home of the Bulgarian army in Sarafovo, after the stormy sea dragged away part of the land around it.

According to the Director of the National History Museum and former Minister for Bulgarians Abroad, historian, Bozhidar Dimitrov, the ancient village could be noticed since last year.

The Mayor of Burgas, Dimitar Nikolov, who arrived on the spot immediately, says that in addition to walls, one could clearly see ancient plumbing and pieces of ancient pottery.

Nikolov explains he will inform in detail Prime Minister, Boyko Borisov, and will ask for funding for archeological excavations.

Dimitrov, speaking for the media, reported Thursday that this was most likely a Roman settlement - a town, not a village, because of the plumbing and the remnants of monumental antique buildings, streets, and temples with columns.

"What is the most intriguing is that ancient maps and document do not mention a settlement at this location, but it could be explained because there had been only two such maps and only the biggest settlements have been marked," says he.

Nikolov first indicated about the possibility of such significant find in September 2011, after another storm. The archeological digs were listed in the pilot project of the cabinet announced in Burgas on January 4, according to Dimitrov. BGN 120 000 are slated for the time being for these excavations, which are to begin immediately after the snow melts and the weather improves in order to prevent damage from another storm.

Borisov is expected in Burgas later Thursday and he will travel there from the village of Biser, where he attended the funeral for the victims of the Monday flood, caused by a burst dam wall.