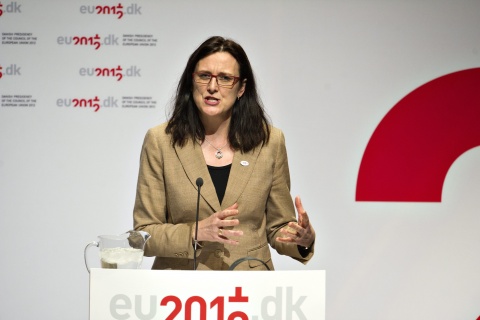 Malmstrom spoke at a high-level debate organized by the European Socialists and Democrats (S&D), on which the group called on EU governments to drop their opposition to a progressive reform of Schengen based on more freedom of movement and co-operation.

"We need to strike the right balance between freedom of movement and security, but in no case should the security concerns prevail over the right to free movement within the EU," said Ioan Enciu MEP, S&D rapporteur for the Schengen governance package and for the accession of Bulgaria and Romania to the Schengen area.

"This should also apply to Bulgarian and Romanian citizens, victims of populism and opportunistic judgements. It is unacceptable that, despite their full compliance with the Schengen criteria, the two countries are still being ostracised," he added.

S&D Group leader Hannes Swoboda commented that "Schengen governance must be improved, enhancing citizens' free movement and ensuring that rules are respected by all citizens and governments."

"Unfortunately, some essential improvements are currently in partial deadlock as some EU countries are refusing to negotiate a more progressive reform with the European Parliament," Swoboda stated.

Bulgaria and Romania were expected to enter Schengen in the spring of 2011, but their entry was blocked by countries such as France, Germany, the Netherlands and Finland, who had worries that problems with organized crime and corruption might jeopardize safety in the Schengen Area.

At present, only the Dutch government has remains officially in opposition of a phased-in Bulgarian and Romanian Schengen membership anytime soon.

On Wednesday, Dutch Europe Minister Ben Knapen said that the latest CVM reports show that Bulgaria and Romania have not shown enough progress for the Netherlands to change its stance.