EC OKs Use of EU Funds for Flooded Bulgarian Village 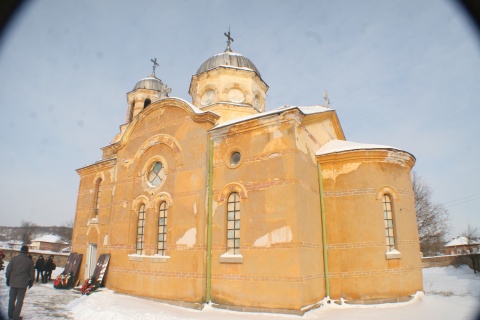 Residents of the village of Biser arrive at the local church to pay last respects to the four people who perished on February 6 when the nearby Ivanovo dam flooded it. Photo by BGNES

The European Commission has given the green light for Bulgaria to use BGN 15-20 M from the funds for rural areas to rebuild the village of Biser.

The information was announced Thursday by Prime Minister, Boyko Borisov. He arrived in the village to be present at the wake and the funeral of the four people who perished on February 6 when the nearby Ivanovo dam flooded Biser.

The cracked wall of the dam burst Monday in the aftermath of heavy snowfall, and Biser was submerged by a 3-meter high wave.

Appraisers are also in the village Thursday to access the damage while construction works will start as early as Friday.

Borisov promised residents that the village will be rebuild to the extend people will remain and lead normal lives there. The EU funds will be used to build new houses for those who lost their homes and for repairs of others that were damaged. The PM further vowed repairs and renovations for the school, which was not damaged by the flood, but had needed them for a long time.

The residents started to receive Thursday the BGN 325 per household as first-step assistance to those whose homes have been destroyed. Money from donations will be spent under the monitoring of the public council of local residents, which was just established. Interior Minister, Tsvetan Tsvetanov says those who have lost the most, will have priority.

In addition, mobile units of the Interior Ministry are expected in the village to reissue free of charge ID papers to those who lost them in the flood.

The Bulgarian cabinet declared Wednesday, February 8, an official day of mourning over the tragic deaths of a total of 8 Bulgarian citizens in floods in southeastern Bulgaria. Two people are still missing – a husband and wife. Despite rescue effort since Monday, they have not been located.