Schools in Bulgaria Close Due to Extreme Winter 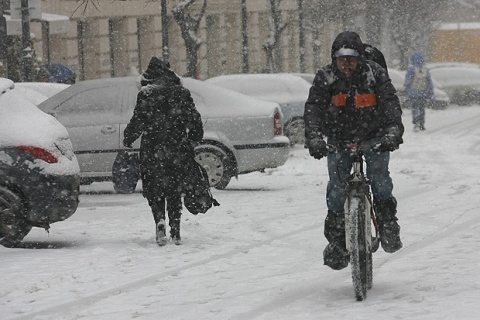 People are running errands in the heavy snowfall Tuesday in the Bulgarian northeast. Photo by DarikNews.bg

All schools in Bulgaria will be closed for the remainder of the week due to extreme winter conditions that caused road blocks and floods in different parts of the country.

"Due to the extremely complicated and unforseeable weather conditions and the impassability on most of roads in the country, no classes will be held Wednesday through Friday," announced the Bulgarian Ministry of Education.

Previously fallen heavy snow melting over warmer days during the weekend, combined with fresh precipitation of rain and snow caused massive floods in the southern Bulgarian region of Haskovo.

A broken dam wall flooded the village of Biser near the town of Harmanli in Haskovo Region, claiming the lives of 8 people.

A day of national mourning has been called Wednesday to commemorate the victims.

Water reservoirs and rivers have been overflowing Kardzhali region in the south, as well as in other parts of the country.

Severe winter conditions were on site in Bulgaria's northeast Tuesday, with all traffic stopped in Ruse, Razgrad, Silistra and Shumen regions.

Enormous snow drifts, combined with blizzard winds and close to nill visibility blocked all traffic in Ruse region throughout Tuesday.

Access to neighboring Romania, which is experiencing similar extreme winter conditions, through the Danube Bridge at Ruse, has been closed.

Significant snowfall continues to be recorded across the country Tuesday evening.