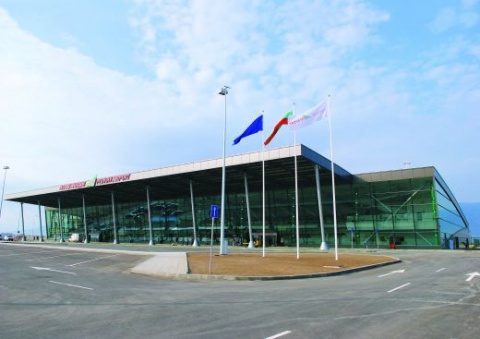 The new passenger terminal of the Plovdiv airport was launched two years ago. File photo

The roof over the "Arrivals" terminal entrance of the airport in Bulgaria's second largest city of Plovdiv has collapsed during the night because of snow that has accumulated on it.

The information was reported Tuesday by the airport Director, Doychin Angelov, who said that there were no passengers at the terminal due to the late hour.

Plovdiv airport was closed Tuesday morning over a 30-cm snow cover, but reopened later during the day.

The new passenger terminal was launched two years ago with BGN 19 invested in it.

Angelov says the construction company "Koev" must be the one to give answers about the quality of construction work. Last year, the roof of the new terminal started leaking while the first problems were reported as early as 2009, several months after the official opening. In addition to the leak and the collapsed roof, there are cracks in the walls and floor.

Last year, the airport authority threatened to sue the builder over the poor quality of work.