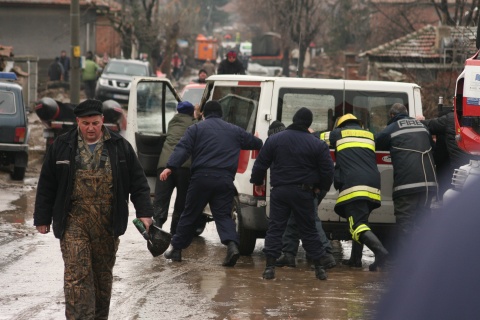 The wall of the Ivanovo dam collapsed Monday morning, causing massive flooding of the village of Biser. Photo by BGNES

The wall of the Ivanovo dam, which collapsed Monday morning and killed eight people in the southern Bulgarian village of Biser, has had cracks which stayed unrepaired for six years.

The problem remained unsolved due to ownership arguments between the Harmanli municipality, the Haskovo District Governor and the Bulgarian Defence Ministry.

"It does not matter whose property the dam was and who was in charge of its maintenance", Prime Minister Boyko Borisov said Monday, as cited by the Bulgarian National Television (BNT).

Borisov specified that the dam had undergone an ownership change but said that it would be the task of the prosecuting authority to look into the matter.

The Prime Minister also announced that ways were being sought to bring all dams under the authority of the Irrigation Systems Company so as to ensure better control of their activity and to prevent uncontrolled release and emergency situations.

The Bulgarian National Radio (BNR) reported Monday afternoon that the dam wall cracking had stayed unrepaired for six years as a result of institutions shirking duties.

Harmanli Mayor Mihail Lisichkov told journalists of dnevnik.bg that the dam was state property and the municipality had been notified about the problem years ago.

He asserted that the maintenance of the dam was not the responsibility of the Harmanli municipality but of the Defense Ministry.

Lisichkov further emphasized that the crack had stayed in place since 2007.

Angelov claimed that it was the Harmanli municipality that was in charge of the facility.

Later on Monday, the Defense Ministry came up with a statement disowning responsibility for the Ivanovo dam.

At the same time, Civil Protection officers explained that the existence of a crack would have to be proved.