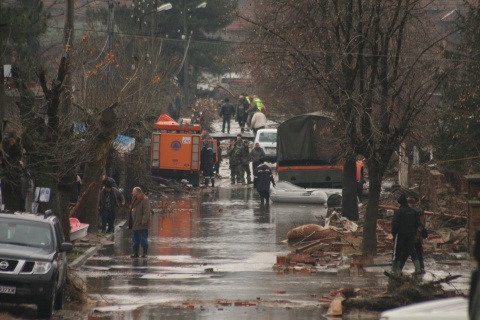 Southern Bulgaria is in the grip of floods caused by the heavy rains and melting snow. Photo by BGNES

Briquette production at the Brikel plant in the southern Bulgarian town of Galabovo has stopped due to halted coal supplies from the state-owned Maritsa Iztok Mines.

Coal extraction at the mines has been disrupted as a result of the flood caused by the heavy rains and melting snow.

The briquette production plant is located near the village of Obruchishte, Galabovo municipality, where more than 200 houses were swamped by the overflowing Sokolitsa River.

Civil Protection teams have been dispatched to the spot to help the victims.

According to Iliya Iliev, Mayor of Obruchishte, the people's only hope is for the rain to stop.

The village has a population of over 1700.

The Brikel Thermal Power Plant (TPP) and the briquette plant of the Maritsa Iztok complex are located in the vicinity of the flooded territory.

The roads from Galabovo to the town of Topolovgrad, the village of Madrets and the Kontur Globul TPP have also been flooded.

The micro-dams located south of Galabovo in the direction of Haskovo were inspected Monday morning and were cleared of ice and are currently overflowing without any danger of the dam walls collapsing.

According to reports of news portal dnevnik.bg, the villages of Obruchishte and Troyanovo occasionally struggle with floods due to the lack of an efficient drainage system.