Bulgarian Butcher Nicked in UK Scared by Police Back Home 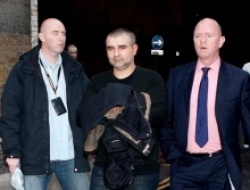 Photo by The Sun

A brutal Bulgarian gangster, who was caught in London last month on an alert from an investigation of The Sun, claims his human rights will be breached if he is extradited to his home country.

Tihomir Georgiev, 43, notorious for slicing off victims' fingers and ears, is fighting extradition from the UK, using legal aid and claiming police in Bulgaria would mistreat him, The Sun reported.

The article adds that Georgiev is now being probed over the sickening torture killings of a drug dealer, the supplier's girlfriend and a journalist.

Georgiev, who has a reputation for slicing off enemies' ears and fingers, fled here last summer.

Two of the latest three murders he is being linked to by cops are those of drugs supplier Emil Kushev, 30, and his lover Billiana Naumova. Both were beaten, tortured with scissors and shot for failing to pay debts in Bulgaria in 2007.

The brute already faces 18 years' jail for stabbing mafia rival Emil Gerasimov to death in 2007. He is also suspected of involvement in two more mob killings.

In Bulgaria, the case against Baretata is in final stage. In addition to illegal drugs trafficking and participation in organized crime, he is charged with plotting the murder of Rumen Stefanov AKA Alf. There are a total of 21 defendants in the trial

In February 2009, Ivanov turned himself in, after authorities issued a nation-wide search warrant for him.