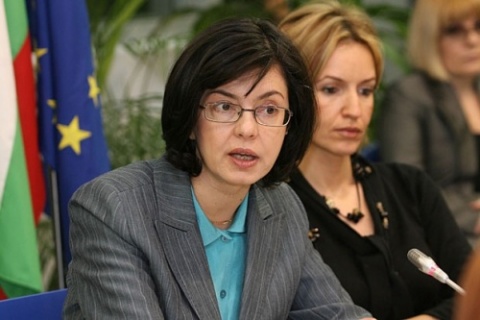 The Bulgaria for Citizens movement founded by Bulgarian former European Commissioner Meglena Kuneva might participate in the next general elections 2013.

This was revealed by Kuneva herself Sunday at a press conference in Varna, where she nevertheless said it is still not clear whether the movement will morph into a party.

"There must be civic energy, a national cause, and it must be clear that we are not politically represented. If those three conditions are fulfilled, we can make a step forward. If not, we don't need to hurry, we can wait," said the ex-EU Commissioner.

At the same time, Kuneva said that transformation into a party is not the only option for participating in the upcoming parliamentary elections.

At the press conference Sunday Kuneva and fellow movement participant, ex-Minister of Education Daniel Valchev spoke of initating a debate on the development of Bulgaria's economy, which they said was stalled.

In particular they drew attention to what they saw as an ever growing gap between the richest and the poorest, to the effect that they lived in what they termed as "two Bulgarias."

Kuneva founded the Citizens for Bulgaria movement in December 2011, after reentering politics in the summer, when she decided to run as a candidate in the October 23 presidential elections.

Eschewing the support of political parties, she ran as an independent candidate and finished third in the race, gathering 14% of the first round vote.

This led analysts to comment that she has a good basis of support to start a new liberal-rightist political project, something she has said she is not averse to.

Asked Sunday whether the Bulgaria for Citizens civic movement might morph into a party, Kuneva said that this is possible, if circumstances mandate it.

Since 2002, she has been Bulgaria's European Affairs Minister and chief negotiator on EU accession.

Kuneva went on to keep her ministerial position in the next coalition cabinet, led by Bulgarian Socialist Party president Sergey Stanishev.

Upon Bulgaria's entry in the EU in 2007, Kuneva became the country's first European Commissioner, taking care of the the consumer rights portfolio.

Currently she is adviser to European Commissioner for Transport Siim Kallas.

Other allies from the National Movement for Stability and Prosperity, such as former Minister of Education Daniel Valchev, were among the founders of the Bulgaria for Citizens movement Sunday.