Clinton in Sofia: US Joins Decade of Roma Inclusion 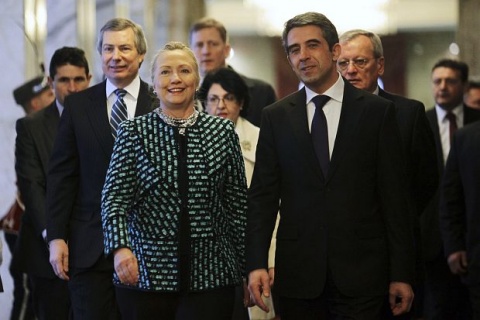 US Secretary of State Hillary Clinton has praised Bulgaria for its efforts in integrating its Roma minority, during her Sunday visit to the country.

After her official program, which including meetings with Bulgarian President Rosen Plevneliev and PM Boyko Borisov, Clinton met representatives of Roma NGOs at the US embassy in Sofia.

"The US will join the Decade of Roma Inclusion as an official observer," stated Clinton.

The Decade of Roma Inclusion (2005-2015) is a joint initiative by European governments, including Bulgaria to further Roma integration in their countries.

Speaking after the meeting, the US Secretary of State said that Roma inclusion is an "unfinished business" in Europe.

She further expressed concern about simmering anti-Roma attitudes in Europe as a whole and Bulgaria in particular.

Roma NGO representatives said that the US State Secretary vowed the support of her country for Roma empowerment and the emancipation of Roma women.