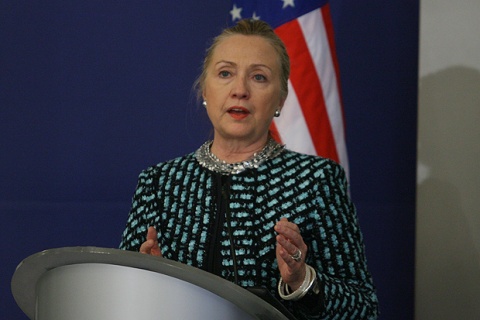 Bulgaria is a key country for the United States in terms of energy strategy, it transpired during US Secretary of State Hillary Clinton's visit to Sofia Sunday.

Clinton vowed to pursue work with Bulgaria, especially in the field of nuclear energy and energy sources diversification.

"Over next week, I will send US Special Envoy for Eurasian Energy Richard Morningstar to Bulgaria," stated the Secretary of State.

Clinton did not mention the topic of shale gas during the press-conference after meeting Bulgarian PM Boyko Borisov and key cabinet ministers.

US energy giant Chevron's interest in exploring for shale gas in Bulgaria sparked controversy in the country, as environmentalists warned that the technology is hazardous.

This provoked the Bulgarian Parliament in mid-January to impose a ban on the exploration and production of shale gas in the country.

It was believed that during her visit Clinton wouuld pressure the Bulgarian cabinet to revoke the moratorium.

However, during the pressconference she failed to mention the matter, saying only that Bulgaria and US should work for energy diversification.

"We must do everything to protect Bulgaria's beautiful nature," clarified Hillary Clinton.

Bulgarian PM Boyko Borisov concurred, saying that environmental concerns should be put ahead of any economic considerations.