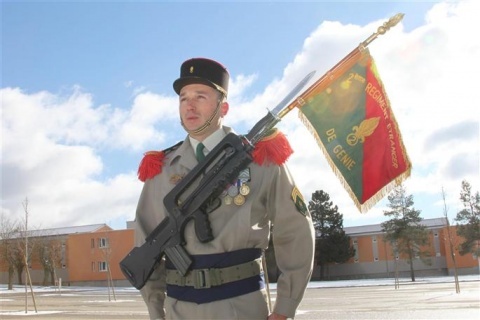 French foreign legionnaire, chief sergeant Svilen Simeonov, a Bulgarian, was among the 4 French soldiers killed in Afghanistan this week. Photo by the Embassy of France to Bulgaria

MAHMUD RAQI, Afghanistan — The Afghan soldier who killed four French troops last month bribed an Afghan army recruiter to forge his enlistment papers, deserted to Pakistan and then bribed his way back into the army the month before the shootings, McClatchy has learned.

The apparent ease with which a rogue soldier twice circumvented the Afghan National Army's vetting process — with the aid of a corrupt recruiter whose job it is to stop such applicants — suggests that the U.S.-led coalition still can't be certain of the integrity of the Afghan security forces to which it's entrusting the country as American troops end their combat mission, perhaps as soon as next year.

The Jan. 20 shooting spree here in Kapisa province, northeast of Kabul, caused outrage in France and prompted President Nicolas Sarkozy to announce that French combat forces would withdraw from Afghanistan by the end of 2013, a year earlier than scheduled.

It also underscored the growing problem of Afghan soldiers turning weapons on the U.S. and international troops who are training them. U.S. military studies have found that so-called fratricide attacks by Afghan soldiers — including at least 39 from 2007 to 2011, according to a congressional inquiry — are usually carried out by soldiers angry at how their coalition counterparts treated them or Afghan civilians, or by insurgents who infiltrated the security forces.

The motive for the shooter in the Kapisa incident — which also reportedly wounded as many as 18 other French troops, some seriously — remains unclear. But the fact that the rogue soldier had just returned from Peshawar, Pakistan, a known hotbed of Taliban militants, apparently didn't raise any red flags.

Cmdr. Abdul Musahiwal, police chief of Musahi district of southern Kabul province, told McClatchy that the shooter was a 21-year-old second lieutenant named Abdul Saboor, who hails from a village in Musahi. Daulat Waziri, deputy spokesman for the Afghan Defense Ministry, confirmed Saboor's identity but declined to discuss details because the investigation was ongoing.

McClatchy obtained a copy of an Afghan Defense Ministry interrogation report in which Saboor described how, in April 2011, he approached an Afghan army recruiter who offered to prepare enlistment papers and a fake national ID card for a bribe of 500 afghanis, about .

Saboor was sent to a training center and then deployed with the 6th Battalion, 4th Brigade of the 203rd Tandar ("Thunder") Corps, according to the interrogation report. He deserted eight months later and went to Peshawar. What he did in Pakistan was unclear, but in the report he said that he was "bored in corps 203 so I fled."

When he returned to Afghanistan he found his way back into the army in December with the aid of the same recruiter in Kabul, he told interrogators. The recruiter knew he was a deserter, but after Saboor paid him 800 Afghanis, about , he was again furnished with fake papers and found himself back in the army.

Under Afghan army procedures, the fingerprints of local elders are supposed to be stamped on recruitment documents to vouch for an individual's identity, But the recruiter stamped the papers with Saboor's own fingerprints, according to the confession.

On Dec. 8, six weeks before the shooting, Saboor was deployed to a base in the Tagab district of southern Kapisa with the 3rd Brigade of the 201st Corps.

The report says Saboor used an M249 light machine gun — a weapon supplied by the U.S. military to the Afghan army — when he shot the French troops, who were unarmed at the time. It says he tried to flee but was captured by Afghan soldiers at the base. He's currently in custody in Kabul.

McClatchy was unable to independently verify the contents of the document, but it appeared to be authentic. The document apparently was drawn up following Saboor's initial interrogation at a Defense Ministry facility in Kabul. Waziri, the defense spokesman, wouldn't comment on McClatchy's findings but defended the government's screening process for army recruits.

"We are very careful about the process, but this was an incident that happened," he said. "Incidents happen, even in America, where somebody takes a gun and goes into a school and kills people. We will try to prevent such incidents in the future."

Through a spokesman, the Taliban denied that Saboor was one of theirs.

"The person who brought a big change in French policies is an Afghan whose consciousness has been awakened, who acted based on his own decision," Taliban spokesman Zabihullah Mujahid wrote in an email to McClatchy. "He did not have previous contact with us."

There were conflicting accounts from officials, however, of Saboor's background and why he went to Pakistan.

Musahiwal described Saboor's family as not especially religious or conservative.

"I believe 100 percent that, because he's not psychologically stable, someone may have said or done something that provoked him to do this," Musahiwal said.

Members of Kapisa's provincial council, an elected advisory board in Mahmud Raqi, the provincial capital, pointed to a recently concluded counterinsurgency operation by French soldiers and their Afghan counterparts in southern Kapisa. According to the council members, coalition forces killed six civilians and wounded 35 in that operation, and they suggested that may have prompted the shooter to mount his attack.

Waziri, the defense spokesman, confirmed that a joint French-Afghan operation had occurred, but he wouldn't offer details.

However, Jawid Kohistani, a defense analyst and former officer in Afghanistan's intelligence service, the National Directorate of Security, said that Afghan defense officials told him they were confident that Saboor was a Taliban plant and that the Taliban was denying involvement to safeguard their tactics.

Kohistani said that he doubted whether the deaths of civilians in Tagab would have prompted Saboor to lash out, because he had no connection to the area.

"I don't think the civilian casualties had any impact on him," Kohistani said. "If the soldier was someone from Tagab or if his relatives were killed in that operation, the attack would have been understandable."

Whatever Saboor's motivation, the ease with which he rejoined the Afghan army could severely embarrass Afghan politicians and commanders. Kohistani said that he obtained a copy of the interrogation report from younger Afghan army officers who are fed up at corruption within the army and at senior officials who have hidden details about previous fratricide cases and turned a blind eye to problems with recruitment and vetting.

The Defense Ministry "wants to hide its failure with a cover-up," Kohistani said.

The announcement this week by Defense Secretary Leon Panetta that U.S. forces could shift as early as next year from a combat role to one more focused on training Afghan forces has refocused attention on the troubled training mission — particularly the growing number of Afghan attacks on coalition personnel.

A U.S. military report last year by behavioral scientist Jeffrey Bordin found that fratricide was "a growing systemic threat" that was causing "a crisis of confidence and trust" among Western soldiers training Afghan forces. The report found that the attacks were "having deleterious effects on some (coalition) states' willingness to continue providing trainers ... let alone continue the war effort."

A significant number of incidents weren't the work of Taliban infiltrators but spontaneous reactions by Afghan soldiers to the way they, or Afghan civilians, were treated by international forces, Bordin wrote. Civilian casualties were "critically important issues," he said.

In addition, many Afghan security personnel reportedly "demonstrated a general loathing of U.S. soldiers," who they found to be "extremely arrogant, rude, bullying, and prone to using profanities."

At a congressional hearing in Washington this week, Rep. Buck McKeon, R-Calif., chairman of the House Armed Services Committee, said that Afghan soldiers had carried out 39 attacks on coalition forces from 2007 to 2011. The vast majority occurred in the last two years, coinciding with an increased U.S. troop presence.

McKeon, in remarks prepared for the hearing, said that "screening and vetting has been tragically weak in picking up signs of threats." (Stephenson and Safi are McClatchy special correspondents.

The original text can be found HERE.