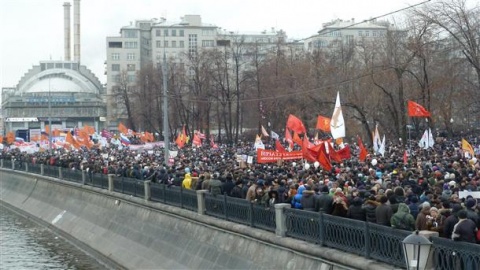 About 100 000 anti-Putin protesters are reported in Moscow Saturday along with another 100 000 at a pro-Putin rally. Photo by, Vasko Mihalylov, BNR correspondent.

The Saturday protest is the third since December's parliamentary election which was tarnished by numerous reports of fraud and pressure.

Meanwhile, Putin's supporters are holding their own march at a different location in the capital.

The PM will be running again in the March presidential election.

People at the rallies will be braving temperatures as low as -19C, BBC reports.

Not long after the marches had got underway, police in Moscow said the numbers at the pro-Putin rally far outweighed those at the 'Honest Elections' march, according to the British media – 90 000 against 23 000, respectively.

The correspondent of the Bulgarian National Radio, BNR, in Moscow reports about 100 000 people at each of the two rallies.

Anti-Putin protesters are marching from Kaluzhskaya Square to Bolotnaya Square, carrying white balloons - the official color of the movement. The organizers of the Saturday's protest are demanding a re-run of December's election, and calling on people to vote against Putin in March's presidential election.

The BBC's Steve Rosenberg in Moscow says the organizers do not expect to be able to stop the PM from winning March's election, but they hope they can pile pressure on him to institute political reform.