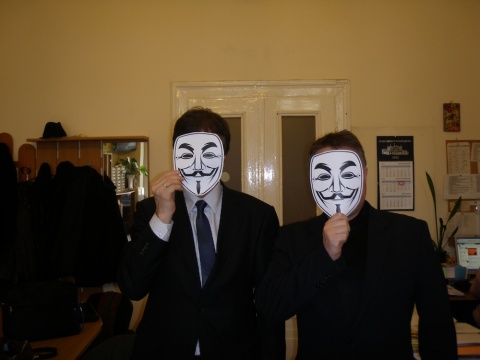 Bulgarian MPs wear the mask of Guy Fawkes, symbol of the global protest against ACTA. Photo by Open Parliament

A number of Members of the Bulgarian Parliament protested Thursday and Friday against the singing of the controversial international ACTA agreement.

On the initiative of the blog "Open Parliament" and following the example of their colleagues from the Polish Parliament, they agreed to wear the mask of Guy Fawkes, symbol of the global protest against ACTA, and to have their picture taken with it.

The MPs say they support copyright laws, but oppose ACTA over its possible turning into an instrument to limit freedom of speech, to control internet use, and to turn into an obstacle for the exchange of information and knowledge online.

Transcripts from the meeting of the Council of Ministers from January 11 reveal that it had been Economy and Energy Minister, Traicho Traikov, who had made the proposal, which stirred much discontent in Bulgaria, both because it had not been discussed by the cabinet and because the public had been kept entirely in the dark about the decision to sign ACTA, until prominent Bulgarian bloggers and lawyers stirred large-scale noise about it. They lashed out at the signing of ACTA over their belief the agreement will bind countries to install legal regulations that excessively and unduly broadly penalize Internet users.

On Thursday, two Bulgarian NGOs – of Internet users and Internet service providers reached a handshake deal with the government in which Prime Minister Boyko Borisov promises that Bulgaria will ratify the ACTA with reservations.