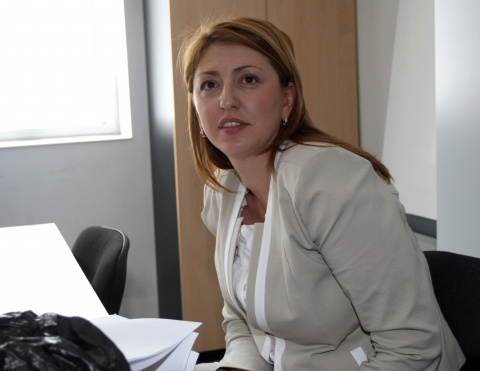 SCC Chair Vladimira Yaneva has received a reprimand, the lightest form of disciplinary action, for 43 delayed trials. Photo by BGNES

The penalty was approved with 17 votes in favor and 2 abstainees.

After the vote, a VSS member explained that Yaneva had only committed insignificant delays by 2 or 3 months.

Two months ago, the VSS penalized Vladimir Astardzhiev, a judge at the SCC, with a 10% pay cut for 31 delayed trials.

In the summer of 2011, the VSS Inspectorate ordered an inspection at the entire Penal Division of the Sofia City Court after it emerged that Yaneva had flouted deadlines in the embezzlement trial against the former executives of the controversial municipal real estate company Sofiyski Imoti.

In May 2002, the current SCC Chair, who had just been appointed Junior Judge, sealed a contract for the purchase of two pieces of property from Sofiyski Imoti as a proxy for a company owned by her father.

Eight years later, Yaneva was assigned the embezzlement trial against the management of the municipal real estate company, delaying her pronouncement for several months and eventually calling the case closed and returning it to the Prosecutor's Office.

Bulgaria's Commission for Prevention and Ascertainment of Conflict of Interest eventually acquitted Yaneva of conflict of interest charges and the Sofia City Prosecutor's Office upheld the ruling.

The VSS Ethics Committee did not find any problem with Yaneva's conduct either.

The inspection at the Penal Division of SCC showed that Miroslava Todorova and Vladimira Yaneva had the largest number of delayed trials, 57 and 43, respectively.

Two weeks ago, the VSS penalized Miroslava Todorova, who is also Chair of the Bulgarian Judges Association (BJA), with a 15% pay cut for a period of two years due to a "systematic failure to observe deaslines".

Ivan Koev, a judge at the SCC, was also given a reprimand for a total of 32 delayed trials.

Yaneva, who is a close family friend of Interior Minister Tsvetan Tsvetanov, was appointed SCC Chair in end-May.

Her appointment stirred a scandal due to her scant four years of experience, two of which had been spent on a maternity leave.

Velcihka Tsanova, the other candidate for the post, challenged the outcome of the VSS vote and filed a lawsuit, claiming that VSS had applied unclear criteria.

The saga triggered several protest resignations and accusations of unauthorized intervention on the part of the executive in affairs of the judiciary.

At the same time, two parallel protest campaigns urging the "totally discredited" VSS to collectively resign were organized by the Bulgarian Helsinki Committee and by the bivol.bg website for investigative journalism.

The appointment was initially canceled by a three-judge panel of VAS on November 03.

On January 12, a five-judge panel of VAS conclusively declared the appointment procedure lawful.