Half of Syria Wrested from Assad's Control - Report 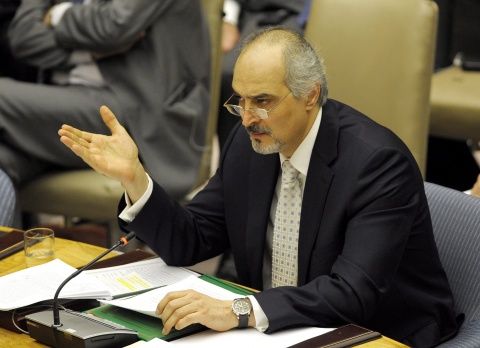 Bashar Ja'afari, Syrian Ambassador to the United Nations, speaks during a UN Security Council meeting on the ongoing violence in Syria, 31 January 2012. EPA/BGNES

Close to 50% of Syria's territory is no longer under the control of President Bashar Al-Assad, according to Free Syrian Army commander Riad al-Asaad.

Colonel al-Asaad, formerly of the official Syrian army, defected in July 2011 to join the pro-democracy rebels requesting an ousting of President Assad.

Wednesday Israeli edition Yedioth Ahronoth quotes al-Asaad saying that close to half of Syria is not under government control.

The colonel however is reported saying that rebel forces will not try to claim more, fearing that the government might deploy heavily armed units.

Over the weekend, heavy fighting was reported in suburbs of capital Damascus, which until recently was not part of the rebelling territories.

At the same time, calls for international intervention under the auspices of the UN has intensified.

The UN Security Council is holding a session on violence in Syria and mulling a resolution calling for President Assad to step down.

Russian UN envoy Vitaly Churkin has however said that Russia will not be supportive of a UN resolution that could exacerbate the conflict.

This has dispelled initial impressions that Russia might be softening its stance seen as supportive of the Assad regime and explicitly opposing international intervention.