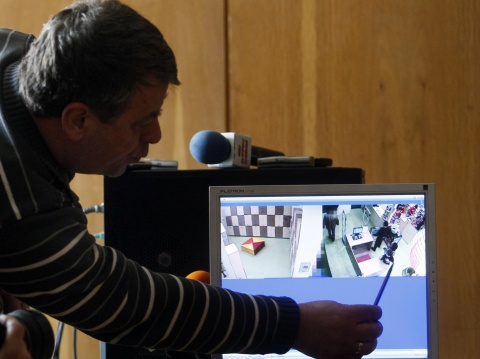 Stefan Klenovski, who was arrested in a shopping center in Sofia on the evening of January 27, has been placed under house arrest by the Sofia City Court.

Klenovski had a European Arrest Warrant (EAW) issued for him in connection with a police operation codenamed Shock held last year against a crime ring specialized in ATM scams.

The remand measure was issued Tuesday by Miroslava Todorova, Chair of the Bulgarian Judges Association (BJA), who was recently accused by Interior Minister Tsvetan Tsvetanov of patronizing organized crime and of incompetence.

Todorova explained the remand measure with the facts that Klenovski was the father of four, had a job and no prior convictions.

The judge, who is likely to file a libel lawsuit against Tsvetan Tsvetanov over the defamatory remarks, said that it was up to the Interior Ministry to oversee the implementation of the remand measure, which was why she had no doubts that Klenovski would go into hiding.

The prosecution demanded that Klenovski be kept in permanent custody due to the EAW issued by Italy and added that he was part of an organized crime ring which had committed "numerous crimes".

Stefan Klenovski demanded justice from the court and vowed he would not go into hiding.

Once out of the courtroom, he exclaimed that he had not been beaten by the police, but had been shot at in front of his child.

The timing of the alleged shooting remained unclear but Interior Ministry officials said that Klenovski had once managed to run away from police officers in Sofia's Mladost residential district.

After Klenovski's arrest, his wife complained to journalists that policemen had used excessive force against him in front of children at the shopping center where they had been celebrating the birthday of their son.

To prove the accusations wrong, Valeri Yordanov, Director of Sofia District Police Directorate, gave an ad hoc press conference during which he presented a recording of Klenovski's arrest.

The remand measure can be appealed before the Sofia Appellate Court.