6,000 Perform Ancient Rites to Drive Off Evil in Bulgaria 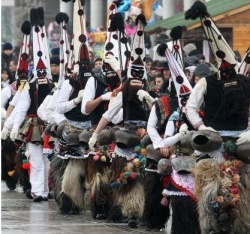 Photo of the 2012 Surva Festival in Pernik, Bulgaria, where thousands gather in kukeri festivities. BGNES

Bulgaria's largest Kukeri event, a tradition in which people gather in traditional costumes to drive off evil spirits, is underway in the western city of Pernik over the weekend.

More than 6,200 participants from around the world have gathered at the festival, which has its 21th edition since being founded in 1966.

Henry van der Kroon, chair of the European festival towns federation, is honorary guest to the festival this year.

A number of events, such a costume-making workshop, and a bazaar for kukeri outfits, are featured at the event.

The closing of the festival will be with a traditional horo dance at the Pernik central square at 6 pm Sunday.

The Surva Festival, which first took place in 1966 as a cultural event based on Bulgaria's folklore traditions, is the largest carnival event in Bulgaria and the Balkans.

In 2011, a representative of UNESCO announced that the kukeri tradition and theSurva Festival in Pernik will be included in UNESCO's list of protected non-material cultural heritage once the respective procedure is completed.