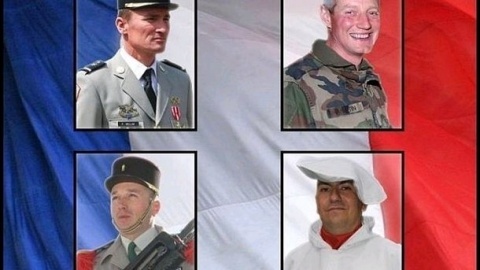 Bulgarian Chief Sergeant, Svilen Simeonov, 34, who was killed in Afghanistan, is being buried Saturday in his native village of Rakovski, near the northeastern city of Razgrad.

The village has declared Saturday as a day of mourning, the Mayor announced. Locals want to pay tribute to Taner Uzunov, as Svilen is known in the village by his Muslim name, he says.

The funeral started at 9 am. In order to give opportunity to more people to pay last respects, the body is located in a public building, near the house where he was born.

Simeonov had served in the French Legion for 10 years, and Afghanistan was his last mission. He had planned to return to Bulgaria to join his wife and 3-year-old boy in February.

France already paid tribute to the murdered soldiers with a military honors ceremony in Paris on Tuesday. Five of Simeonov closest relatives attended on the expenses of the French State, but they said as early as the news became known that they want to bury him in Bulgaria.

On Wednesday, President Nicolas Sarkozy presided in Varces (Is?re) a national tribute to the four.

The four soldiers from the French military contingent were killed in northern Afghanistan on January 20th.

Exactly a week ago, the Bulgarian National Radio announced that Bulgarian Chief Sergeant, Svilen Simeonov, was among those killed.

On Sunday, the Embassy of France in Sofia issued a statement of regret for the Bulgarian member of the Foreign Legion.

The French soldiers were killed after a serviceman from the Afghan National Army opened fire. Their bodies were were transported to Paris on Monday, after being sent off from Kabul with military honors.

In the aftermath, President Nickolas Sarkozy said France was suspending its training programs in Afghanistan while Defense Minister Gerard Longuet immediately traveled there.