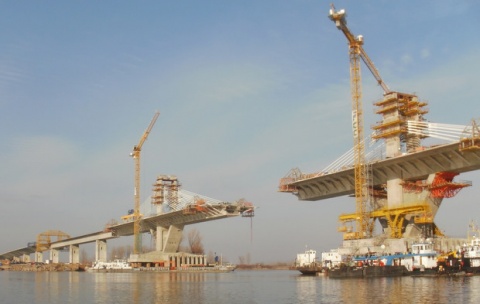 The second Bulgaria-Romania bridge should be completed by the end of 2012. Photo by danubebridge2.com

The sum of EUR 25.7 M will be added to the total cost of the construction of the second bridge linking Bulgaria and Romania across the Danube River, the Bulgarian Parliament agreed.

The bridge will finally be completed by the end of November 2012, Bulgaria's Transport Ministry announced in a statement Friday as the Bulgarian Parliament voted to approve the measures taken by Transport Minister Ivaylo Moskovski over the past two years in order to ensure the completion of the bridge between Bulgaria's Vidin and Romania's Calafat.

The Bulgarian Transport Ministry reminds that as a result of its measures, on August 1, 2011, the European Commission extended the validity of the financial memorandum for EU funding for the so called Danube Bridge 2. The same applies for two funding contracts with the European Investment Bank, which have been extended until 2012.

"These actions provided for the stability of the initially contracted financial framework without allowing even one source of funding to be lost regardless of the delay in the realization of the project," the Transport Ministry in Sofia said.

It explained that the one tangible risk for the completion of Danube Bridge 2 stemmed from unresolved issues under the contract with Spanish company FCC, which is constructing the bridge, as a result of changes in the Bulgarian and Romanian legislation after the EU accession of the two Balkans states and because of unfavorable engineering and geological conditions on the construction site.